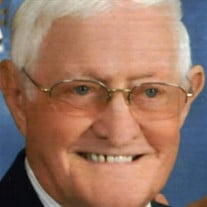 Longtime Arab resident Billy Jack “Bill” Tankersley died Sunday morning, Nov. 18, 2018. He was 85. Funeral services will held Tuesday at 2 PM at Gober Funeral Chapel, with Dr. Clint Landry, pastor of Arab First Baptist, officiating. Burial will be at Brookwood Cemetery & Memorial. Bill was born on March 19, 1933, in Blue Mountain, Ala., near Anniston. He was one of seven children born to Houston and Pearlee (Coleman) Tankersley. After serving in the Navy, Bill married Barbara Ray Treadwell of Anniston on July 31, 1956. The couple lived in Gadsden, where Bill started an extended career as a civil servant for the Air Force and Army after serving in the Navy as a radio operator. Career moves took Bill and his wife to Mobile, Ala., where their first son, Michael Van, was born, then to San Antonio, Texas, before they returned to their home state in the early 1960s. They moved from Huntsville to Arab on Jan. 16, 1964, the day their second son, Garry Miles, was born in Huntsville. They soon moved their church membership to Arab First Baptist Church. Bill earned numerous awards during his time working for the federal government, mostly at Redstone Arsenal, and was known by his co-workers for his good humor and witty retirement and birthday poems he frequently penned for fellow workers. He retired from the federal government in 1988 and enjoyed spending time with his good friend, the late Luke Williams, making TV repairs for their friends in Arab. Both were self-taught in TV repair work and many local people benefited from their low repair bills. Bill also enjoyed watching Alabama football and the Atlanta Braves and was a frequent and vocal critic of then-Braves manager Bobby Cox. He also loved golf and was part of a group of local golfers who helped start up Twin Lakes and Arab Country Club (now Brookside) in the 1960s. He was preceded in death by his parents, Houston and Pearlee, and a brother and sister-in-law, Nathan and Joyce Tankersley. He is survived by his widow, Barbara, and their sons, Michael and Garry. He is also survived by a sister, Mary Jo Anderson, and brothers and sisters-in-law Donald and Ima Jean (Jean) Tankersley; David and Betty Tankersley; Edwin (Eddie) and Barbara Tankersley; and Kenneth and Bobbie “Cricket” Tankersley. He is also survived by three grandchildren, Tyler, Zackary and Danny Tankersley; and seven nephews and nine nieces. In lieu of flowers, the family requests donations by made in Bill’s honor to Arab First Baptist Church’s building fund (502 N. Main St., Arab, AL 35016/256-586-3153) and/or Shepherd’s Cove Hospice/Hospice of Marshall County, 408 Martling Road, Albertville, AL 35951/256-891-7724).

The family of Bill Tankersley created this Life Tributes page to make it easy to share your memories.

Send flowers to the Tankersley family.