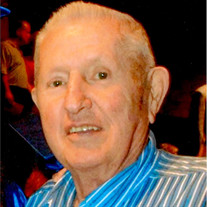 Bobby Ray Miller, 77 of Union Grove, formerly of the Strawberry Community here in Arab passed away Wednesday, December 6, 2017 at his residence. Mr. Miller was born in Blount County September 30, 1940, the son of Clesbie and Ester Poole Miller. He was a graduate of J. B. Pennington High School, Class of 1958. He and the former Patsy Woods were married 50 years. He served for two years with Honor and Courage in the United States Army. He was a member and deacon of New Harmony Baptist Church and a member of IBEW Local 136 and later 558. He also belonged to the Arab Masonic Lodge and Shriners. He is survived by his wife: Patsy Woods Miller of Union Grove; his children: Bobby Lelton Miller of Union Grove, Suzette Borden (Gary) of Lacey’s Spring; Grandchildren: Whitney Borden, Abby Borden both of Lacey’s Spring, Clayton Miller of Union Grove and a beloved K-9 companion, his dog Ace. Funeral service will be 2:00 p.m. Friday, December 8, 2017 at Gober Funeral Chapel, Brother Ennis Stone, officiating. Burial will be in Arab Memorial Cemetery, Gober Funeral Chapel, directing. Pallbearers will be Lelton Miller, Clayton Miller, Gary Borden, Joe Wallace, Roger Bales, David Wallace, Tristan Wallace and Tyler Wallace. Visitation for Mr. Miller will be from 12 p.m. until 2 p.m. Friday, December 8, 2017 at Gober Funeral Chapel. The Family has requested that in lieu of flowers you please make donations to the charity of your choice in memory of Bobby Ray Miller.

The family of Bobby Ray Miller created this Life Tributes page to make it easy to share your memories.

Bobby Ray Miller, 77 of Union Grove, formerly of the Strawberry...

Send flowers to the Miller family.