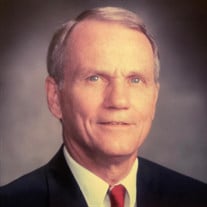 Byron Brightwell Nelson, Jr. of Union Grove, Alabama passed away on April 8, 2021. Byron was born on December 2, 1934 to Byron B. Nelson, Sr. and Frances Seay Nelson, who preceded him in death. He has one sister, Marie Nelson Fancher. Byron is survived by his wife of 56 years, Carolyn Liles Nelson; two children Anna Nelson Richardson (David), Amy Nelson Torbert (Mark), and two grandchildren Mary Frances Torbert and Mark Torbert, Jr. Byron attended Tallassee High School graduating in 1953. Receiving a Congressional appointment to the United States Naval Academy in 1954. A football injury his plebe year led to his transfer to Auburn University where he received a BS in Education in 1957 and was commissioned a 2nd Lt in the US Army. In 1959, he received a MS in Education from Auburn University. After leaving the Army, he taught in Wetumpka, Alabama and Montgomery, Alabama prior to attending Peabody College at Vanderbilt University on a Ford Foundation Fellowship where he earned an EdD in school administration. From 1963 to 1967 he was director of finance for the Richmond, Virginia schools and the following year he was a junior high school principal in Brevard County, Florida. Byron returned to Richmond as a high school principal before becoming assistant superintendent for business in 1969. He returned to Alabama in 1971 as superintendent of the Arab City Schools for 3 ½ years before serving as superintendent in Decatur, Alabama for 17 ½ years and in Homewood, Alabama for 6 years. In 1984 The Executive Educator magazine named Byron one of the 100 top executive educators in North America. In 1994 he was inducted into the Alabama Educational Leadership Hall of Fame. Byron was active with the Auburn University Alumni Association as well as the Auburn University School of Education. He was District Governor for Rotary International District 6860 in 1984-85 and member of the Arab Rotary Club. He received the Silver Beaver scouting award while serving on the Tennessee Valley Boy Scout Council. Byron was a member of the Arab First United Methodist Church. A loving father and devoted husband, he enjoyed spending time with his family above all. Always willing to take time to spend with his grandchildren, Byron was truly interested in their daily lives while taking time to teach important lessons he thought they would gain benefit. He was an avid golfer and enjoyed hosting friends and family while walking the greens of his favorite courses as he entertained with his rich sense of humor. The sports section was the first and sometimes the only section of the newspaper read each day which speaks volumes of his outlook on life. A great conversationalist and sincere friend, father, grandfather and husband he will be truly missed. In lieu of flowers, the family requests donations in Byron’s name to the Arab First United Methodist Church or the Rotary Foundation. If making a contribution to the Rotary Foundation, checks can be made payable to Rotary Foundation and mailed to Arab Rotary Club at PO Box 87 Arab, AL 35016. Memorial Service will be 2:00 p.m. Sunday, April 11, 2021, at the Arab First United Methodist Church.

Byron Brightwell Nelson, Jr. of Union Grove, Alabama passed away on April 8, 2021. Byron was born on December 2, 1934 to Byron B. Nelson, Sr. and Frances Seay Nelson, who preceded him in death. He has one sister, Marie Nelson Fancher. Byron... View Obituary & Service Information

The family of Byron Brightwell Nelson Jr. created this Life Tributes page to make it easy to share your memories.

Send flowers to the Nelson family.