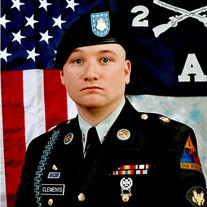 Christopher Garrett “Chris” Clements age 31, of Union Grove passed away Sunday May 14, 2017, at his residence. Chris was born on Feb. 7, 1986, in Huntsville, AL the Son of Garrett William and Linda Arlene Fornshell Clements. He was a 2004 graduate of Arab High School and served in the US Army in “Operation Iraqi Freedom” from 2005-2009, serving in Iraq and Kuwait. He was married to Crimson Buckmeir on July 26, 2014. He was a Truck Driver for Mitchell Grocery. He enjoyed video games, traveling, truck driving, hanging out with childhood friends, his dogs, Game of Thrones, playing with his babies and he enjoyed being with his family and friends. He enjoyed mowing grass and loved Arguing about how awesome President Trump is. He is survived by his Wife: Crimson Clements of Union Grove; Parents: Garry Clements of Madison and Linda and Steve Clark of Union Grove; Children: Dante Clements and Gabriel Clements of Union Grove; Grandparents: Betty Fornshell of Kentucky and Jackie Clements of Union Grove; Brothers: Jonathan Clements of Madison, Steven Clark of New York, Morgan Clements of Madison, Harrison Winter of Ft. Bragg, NC; Sisters: Amy (Colin) Smith of England, Katie (Bradley) Gulledge of Arab and Zoe Clements of Madison; Parents in law: Nicole and Stewart Deaton of Arab; Host of Uncles, Aunts, Cousins, Nieces and Nephews and friends. Funeral Service will be Thurs. May 18, 2017, at 1 PM at New Friendship Baptist Church with Bill Chapman officiating. Burial with Military Honors will follow in the adjoining cemetery. Visitation will be Wed. from 6 PM until 8 PM at Gober Funeral Chapel. Pallbearers will be: Jeremiah Ray, Josh Reliford, Justin Parks, Colin Smith, Chris Timmons and Jonathan Dunn; Honorary Pallbearer will be: Stewart Deaton.

Christopher Garrett &#8220;Chris&#8221; Clements age 31, of Union Grove passed away Sunday May 14, 2017, at his residence. Chris was born on Feb. 7, 1986, in Huntsville, AL the Son of Garrett William and Linda Arlene Fornshell Clements. He... View Obituary & Service Information

The family of Chris Clements created this Life Tributes page to make it easy to share your memories.

Send flowers to the Clements family.