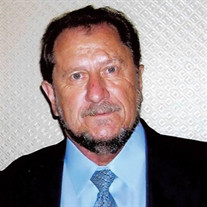 Dennis Leslie Scifert, age 75, of Arab, Alabama, passed away peacefully on Wednesday, August 14th, 2019, after a courageous battle with cancer. He was surrounded by his loving family at his beloved home. Born June 27th, 1944 in Lafayette, Indiana, he was the son of the late Jeannette and Fred Scifert. Dennis retired after 25 years at Boeing at the Redstone Arsenal in Huntsville, Alabama. He was an avid gun collector and enjoyed spending time with family and friends showing off his shooting skills both at the gun range and at his home. Dennis also enjoyed flying small aircraft including crop dusting and adjusting small airplane crashes for insurance companies. Dennis was a member of the American Legion and Veteran of Foreign Wars for his service in the United States Air Force from 1962-1966 including time spent in the Philippines and Vietnam. Dennis is survived by his loving wife of 31 years, Wanda (Betty Sue) Scifert; sisters Wanda Mitchell of Frankfort, Indiana and Michelle Lach of Gary, Indiana and brother Lonnie Scifert of Mulberry, Indiana; along with two children, Kelle Eisenhauer of La Vista, Nebraska and Kyle Scifert of Elgin, Illinois; 3 step children; Shane Hallman, Tina Toler, Angela Ash; 10 grandchildren and 5 great grandchildren along with many loving nieces, nephews and relatives. A Prayer Service will be held on Saturday, August 17th, 2019 at the Gober Funeral Home in Arab, Alabama at 12:00pm followed by visitation continuing until 2 PM. Dennis will be cremated after the service and will be taken to his final resting place beside his later mother, Jeannette Scifert and his late brothers Loren Scifert and Kerry Scifert in Remington Indiana. A service will be held at the Sacred Heart Cemetery in Remington, Indiana on Saturday August 24th, 2019.

Dennis Leslie Scifert, age 75, of Arab, Alabama, passed away peacefully on Wednesday, August 14th, 2019, after a courageous battle with cancer. He was surrounded by his loving family at his beloved home. Born June 27th, 1944 in Lafayette, Indiana,... View Obituary & Service Information

The family of Dennis L. Scifert created this Life Tributes page to make it easy to share your memories.

Send flowers to the Scifert family.