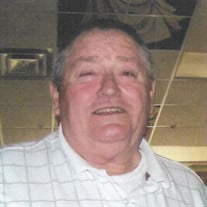 Donald Boyd Snow Sr., 72 of Arab was born on July 5, 1948 in Marshall County Alabama to Boyd and Virginia Leak Snow. He passed away from this earth peacefully at his home on the evening of December 30, 2020. He was a wonderful husband, father... View Obituary & Service Information

If attending visitation or the service, we ask that you please observe CDC recommendations by wearing a mask and observing Social Distancing.

Send flowers to the Snow family.