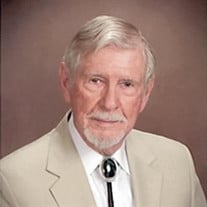 Donnie Isham Huggins, Jr., 92 of Arab passed away Sunday, June 13, 2021, at his residence. He was born August 27, 1928 to Donnie and Lilah Mae King Huggins in Warrenton, Marshall County, Alabama. He graduated from Marshall County High School in 1949. He was also a graduate of the University of North Alabama and held a master’s degree from Jacksonville State University. Donnie was a member of Arab First Baptist Church, Marshall Masonic Lodge #209, and was a founding member of the Arab Rescue Squad serving as the director for many years. He served in the United States Navy during World War II. He also served in the United States Army during the Korean War and was in the United States Army Reserve. Donnie retired from Civil Service after a civilian career with the United States Army and NASA. He is survived by his wife, Hope Huggins; two sons, Michael Huggins, and Thomas Huggins; Daughter and son-in-law, Donna and Mike Camp; Daughter-in-law, Judy Huggins; Granddaughter and Grandson-in-law, Erin Camp-Meeks and Jay Meeks; brother, Harold Huggins; nieces and nephews. He was preceded in death by his parents; his first wife, Betty Jo Black Huggins; two brothers, William “Bugs” Huggins and Larry Huggins; a sister, Carol Joy Huggins; and a son, Steven Lee Huggins. Graveside service was 2:00 p.m. Wednesday, June 16, 2021, at the Brookwood Cemetery with Brother Junior Berry officiating, Gober Funeral Chapel Directing. The family has requested in lieu of flowers to please make donations to the charity of your choice.

The family has requested in lieu of flowers to please make donations to the charity of your choice.

Send flowers to the Huggins family.