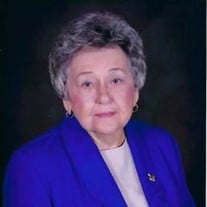 Ila Ruth Cooley, a lifelong resident of Arab, passed away Wednesday March 30, 2022 at the age of 94. She was the daughter of Joseph Toss and Princie Henrietta Hyatt Betterton and was married for 43 years to Walter Duran Cooley who preceded her in death March 13, 1991. She retired from the Arab City School System in 1988 after 25 years of service, beginning as Arab Elementary Secretary in 1963 and ending her tenure in the Superintendent's office in 1988. Following the death of her husband, she joined the Arab Historical Society where she spent the next 20 years doing volunteer work helping build and restore the Arab Historical Village located in the Arab City Park. During this time, she served as president of the Historical Society or Chairman of Village Operations for 13 years. This volunteer work resulted in several awards, including the 2002 Arab Chamber of Commerce "Outstanding Citizen of Achievement Award". Other awards consisted of the Daughters of American Revolution "Certificate of Excellence in Community Service" in 1998; B-Team Angels "Earth Angel Award" in 2003; and Beverly Healthcare, Arab "Volunteer Services and Special Interest Shown to the Residents of the Facility" in 2004. She was a longtime member of the Arab First Baptist Church. In addition to her parents and husband, she was preceded in death by her grandson: Brent Coulter, sisters: Janette Handschumacher, Joyce Isbell, and Claudette Compton; brothers Garland Betterton and Glenton "Snap" Betterton. She is survived by her children and their spouses: Sharon Coulter (Bruce), Charlotte, NC; Richard Cooley (Sheila Cole), Guntersville, AL and Michael Cooley (Pearl), Maryville, TN; grandchildren: Samantha Wallach (Ben), Charlotte, NC; Allison Lang (Donald), Albertville, AL; Alex Cooley (Brittany), Madison, AL; Michael Cooley, II (Sabrina), Huntsville, AL; Jennifer McDaniel (Adam), Huntsville; and Christian Cooley, Maryville, TN.; 8 great-grandchildren; a brother, Joseph T. (Donna) Betterton, Jr., Arab; and several nieces, nephews. Graveside service will be Monday April 4, 2022, at 12 PM at Arab Memorial Cemetery with Bro. Greg Stone, officiating and Gober Funeral Chapel directing. In leu of flowers, donations can be made to the Arab Historical Society, Arab, Alabama in memory of Ila Ruth Cooley.

Ila Ruth Cooley, a lifelong resident of Arab, passed away Wednesday March 30, 2022 at the age of 94. She was the daughter of Joseph Toss and Princie Henrietta Hyatt Betterton and was married for 43 years to Walter Duran Cooley who preceded... View Obituary & Service Information

The family of Ila Ruth Cooley created this Life Tributes page to make it easy to share your memories.

Send flowers to the Cooley family.