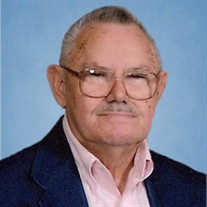 James “Jim” Everett Sharpe, born January 2, 1930, son of the late Okley B Sharp and Beaulah Renfroe Smith, went into eternity at the age of 91 on May 26, 2021. He was preceded in death by his faithful and loving wife, Reva Wilbanks Sharpe, of 67 years. Jim Sharpe bravely served in the Korean War as Staff Sergeant in the Army Medical Corps. Ever diligent, he graduated from the University of Alabama in Huntsville in 1973. Jim was a Chemist for NASA, and helped design parts for the Gemini, Apollo, and various shuttle missions. He finished his career as an Industrial Hygienist. He was a Church of Christ preacher for 63 years in Northern Alabama, and Southern Tennessee; Jim was an active member of Grassy Church of Christ at the time of his death. He had a great love for Monarch butterflies, hummingbirds, and gardening, all of which he pursued until just before his passing. He is survived by his children Gemey Billings, Tanya Sharpe, Timothy Sharpe, Randall Sharpe and Mischa Sharpe White and their spouses Jim Billings, Vicki Sharpe, Ron Walker, and DJ White. He is also survived by his grandchildren Danah White and Jonathan Stone; Kira Gemey, Ryan and Tyler Sharpe; Garrett, Okley, Audrey Smith and the late Brad Sailors. Jim has twenty great-grandchildren, and one great-great-grandchild. His three sisters are Anita Sharp LeMaster, the late Inez Sanders, Sheila “Rene” Hale and a beloved brother-in-law, Burwell “Sonny” Wilbanks. He also has a host of friends he called family. The family will be holding a private graveside service with a Celebration of Life to be announced at a later date. In lieu of flowers, the family requests donations to Shephard’s Cove at www.shepherdscove.

Send flowers to the Sharpe family.