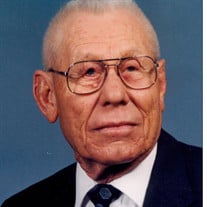 JD Barron age 94, of Arab passed away Tues. Jan. 23, 2018, at Shepherd’s Cove Hospice Facility in Albertville. Mr. Barron was born on Nov. 1, 1923, in Lawrenceburg, TN the son of Howard Barron and Flossie Parris Barron. He served in the US Army in World War II in the 278 Combat Engineer Battalion in the European theatre. He retired from Arab Electric Cooperative where he worked as an Electrical Engineer. He was a member of Gilliam Springs Baptist Church and at the time of his death he was their oldest Deacon. Mr. Barron was also a Mason and he was an avid hunter and fisherman. He was married to Lurlene Barron who passed away on Jan. 6, 2011. He is survived by his Daughter, Andrea Parrott (Steve) of KY; Sons, Michael Lynn Barron (Lynne) of Arab and Mark Phillip Barron (Sharon) of Arab; Grandchildren, Lindsey D’Lugos (Clay), Whitney Christiansen, Michael Andrew Barron (Autumn), Hunter Ross Barron; Great Grandchildren, Abigail Grace D’Lugos, Emmett Alexander D’Lugos, Michael Tateum Barron and Lance Beaudi Barron and numerous nieces and nephews, other family and friends. He was preceded in death by his Parents, Howard and Flossie Barron; Wife, Lurlene Barron, Brothers and Sister, E.B. Barron (Edna), Travis Barron (Maudine) and Renee Cleghorn (Voyt); Nephews, Larry Barron and Clay Barron. Funeral Service will be Thurs. Jan. 25, 2018, at 1 PM at Gober Funeral Chapel with Bro. Max Roden officiating. Burial will be in Gilliam Springs Cemetery. Visitation will be from 11 AM until 1 PM Thurs. at Gober Funeral Chapel. In lieu of flowers memorials may be made to Shepherd’s Cove Hospice or Gilliam Springs Cemetery Fund.

The family of JD Barron created this Life Tributes page to make it easy to share your memories.

Send flowers to the Barron family.