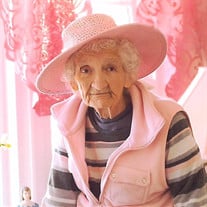 JEWELL YORK, 95 Jewell Davidson York, 95 of Arab, died peacefully in her sleep at Marshall Medical Center North Saturday, May 6, 2017. Mrs. York was born April 9, 1922 in Guntersville, Alabama to Emmett and Millie Davidson. She was married April 22, 1939 to Ellis Orville York for 51 years, he preceded her in death July 14, 1990. She was also preceded in death by a son: Ellis Junior York, two daughters: Willene Griggs and Kara Hornsby, her parents: Emmett and Millie Davidson and a brother: Henry Davidson. She was a long-time resident of Arab and an excellent cook. In her early years she worked as a cook at the Frosty Freeze, El Rancho Café and the Midas Burger. She quit working outside the home when she was in her fifties. Jewell, a fabulous cook, loved to cook for her family and friends. Her interests also included, fishing, camping, sewing and working in her yard. She is survived by her three children and their spouses: John Wayne York and Sherry, Joan Hardin and James, Ann York and a daughter-in-law: Dorothy York all of Arab; 13 grandchildren; 26 great grandchildren, 7 great, great grandchildren and a sister: Hattie Tolbert of West Monroe, Louisiana; several nieces, nephews, cousins, friends and neighbors. Funeral service will be 3:00 p.m. Sunday, May 7, 2017 at New Friendship Baptist Church, Brother Greg Stone and Brother Tony Cox, officiating. Burial will be in the adjoining cemetery, Gober Funeral Chapel, directing. Her beloved grandchildren will serve as pallbearers. Visitation will also be at the Church from 2 to service time at 3 p.m.

The family of Jewell York created this Life Tributes page to make it easy to share your memories.

Send flowers to the York family.