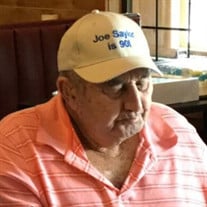 Joe Stancil Saylor, 92 of the Ruth Community, Arab passed away Tuesday, May 18, 2021 at Huntsville Hospital. Joe was born April 26, 1929 in Ruth, the son of Luther Arnold Saylor and Pearl Mae McGuire Saylor. He was married to the late Louise Robertson Saylor for 70 years at the time of her death, May 26, 2020. He attended Taylor Assembly of God. Joe and his wife, Louise lived for a number of years in Taylor, Michigan, where he worked in the automobile and other industries. He also co-owned several business', including a laundromat, a plumbing company, a motorcycle sales and repair shop, as well as several rental properties. Joe began losing his eyesight and had to take early retirement, due to his eye condition (retinitis pigmentosa). The family moved back to Arab and the Ruth community in the early seventies. Joe was a strong-minded, instinctive and intuitive person, who never let his blindness hold him back. He worked on cars, overhauled engines, rode horses, farmed, played music and continued to live life to the fullest. Joe was inspirational to so many who knew him. He lived a good life and always tried to do the right thing. He was also a very compassionate and giving person. He would assist anyone he thought needed a helping hand and was an excellent advice giver. Joe loved the Lord and his family with all his heart. He was an avid SEC and Alabama Crimson Tide fan. He loved going to LeCroy's Restaurant, when he was able and never turned down a good ice cream cone. He will be greatly missed by his family and friends. He is survived by his Daughters: Frankie Greer (Joe) of Cullman and Louette Saylor Stallings (Tommy) of Arab; Grandsons: Christopher Greer (Jennifer), Derek Greer (Rachel) and Brett Greer; Seven Great Grandchildren; Sister: Mary Pierce of Hulaco and Sister-in-law, Norma Estes Saylor of Taylor, Michigan. Funeral Service will be 1:00 p.m. Friday, May 21, 2021, at Gober Funeral Chapel with Brother Fred Nichols officiating, Gober Funeral Chapel directing. Visitation will be 12:00 p.m. until service time at 1:00 p.m. Friday at Gober Funeral Chapel. Pallbearers: Chris Greer, Derek Greer, Brett Greer, Brenden Greer, Tommy Stallings, Joe Greer Kevin Darmer, Rick Milbanks and Kevin Stallings.

Joe Stancil Saylor, 92 of the Ruth Community, Arab passed away Tuesday, May 18, 2021 at Huntsville Hospital. Joe was born April 26, 1929 in Ruth, the son of Luther Arnold Saylor and Pearl Mae McGuire Saylor. He was married to the late Louise... View Obituary & Service Information

The family of Joe Stancil Saylor created this Life Tributes page to make it easy to share your memories.

Joe Stancil Saylor, 92 of the Ruth Community, Arab passed away...

Send flowers to the Saylor family.