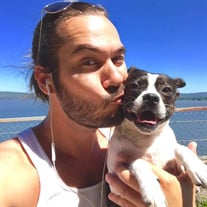 Jon Bryan Raynor, 31 of Guntersville, Alabama, entered into eternal rest on Monday, April 22, 2019, following a nearly 11-month battle with brain cancer. His final months were spent surrounded by his family and friends. Jon was born in Melbourne, Florida, on December 10, 1987. From a young age, Jon possessed the uncanny ability of lighting up any room he entered. His friends were numerous, diverse, and world wide. He caught the acting bug and was active in the local theater, The Whole Backstage Theater Guntersville, and will be remembered best as the kind giant Karl from the production of Big Fish, as well as the parts he played in Legally Blond and Evita. Jon worked a difficult and emotional job for the Alabama Dept of Human Resources, where he provided an essential service of supervised visits between children in Foster care and their parents struggling to reunite. Jon is survived by his parents: Teri Hamel (Matt Luttinger) and Stanley (Marianne) Raynor; Grandmothers: Vickie Hamel and Stella Raynor; his siblings: Ryan (Tracy) Raynor, Chris Raynor (Penni Stone) and Heather (Larry) Villard; nieces: Ivalee, Evelyn, Brynlee, Adeline and Kelsee, and nephew: Jesse. Numerous beloved aunts, uncles, cousins, dear friends, and his dogs: Gizzie and Scottie, who all loved him deeply. He is predeceased by his Grand Father: Richard Hamel, and Uncle: Glenn Hamel. A celebration of Life will be held at a later time. Gober Funeral Chapel assisted the family with cremation arrangements.

The family of Jon Bryan Raynor created this Life Tributes page to make it easy to share your memories.

Send flowers to the Raynor family.