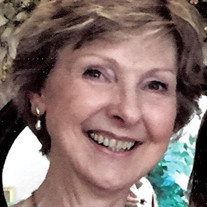 Judith Ann Arnold Freeman 1946 - 2019 Judith Ann Arnold Freeman, 73, of Lacey's Spring, AL passed away on December 8, 2019. Judy was born on February 6, 1946 in Florida, to Mildred Roberts Arnold and Robert Eldo Arnold. She is preceded in death by both her parents. Judy is survived by her husband of 52 years, Kenneth Lamar Freeman; daughter Skyla Michelle Freeman of Washington, DC; son Bret Lamar Freeman and daughter-in-law Ashley Lynn Freeman, and grandson Ethan Lamar Freeman of Huntsville, AL; sister Vicki Arnold Ussery and brother-in-law John Ussery of Lexington, GA; sister-in-law Lynda Welton Freeman and brother-in-law Derek Welton of Anchorage, AK; and nieces and nephews and great-nieces and -nephews. She was a long-time member of Whitesburg Baptist Church of Huntsville, where she taught Sunday school for many years. Judy was known for her natural elegance and grace, but beloved for her godliness, humility, and radiant love of others. She and Ken married the day after graduating from college, and together lived a life filled with joy and adventure—from traveling the world, to residing in Asia, founding a cattle ranch in Alabama, and raising their two children. A gifted teacher, she home-schooled both of her children and later became the administrator of Whitesburg Baptist Christian School, where she influenced the lives of many young people. Judy's life was a boundless blessing to her family, an encouragement to her friends, and she was always generous to the stranger. "Her children arise and call her blessed; her husband also, and he praises her: 'Many women do noble things, but you surpass them all,'" Proverbs 31:28-29. Visitation will be held at 10:30 a.m. on Saturday, December 14, at Whitesburg Baptist Church's South Campus Chapel, 7300 Whitesburg Drive, followed by a funeral service at noon, with Dr. Jimmy Jackson officiating. Judy made the well-being and happiness of little ones her life's work; those wishing to donate in lieu of flowers may make memorials to the Huntsville Pregnancy Resource Center, Huntsvilleprc.org.

The family of Judith Ann Freeman created this Life Tributes page to make it easy to share your memories.

Send flowers to the Freeman family.