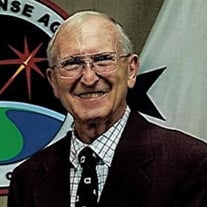 Lawrence "Larry" Wayne Hartman entered his new life on October 16, 2021. He was born to Max and Nell Rodgers Hartman on May 14, San Antonio, Texas. Larry graduated from Central Catholic High School and St. Mary's University (both San Antonio) with a B.S. Mathematics and entered the US Army as an Air Defense Artillery officer. In 1972, he married Lynne at Ft Bliss, TX. During his 13 year Army career, he was stationed in S.Korea, Japan, Greece, and the US. After leaving active duty, he remained in the Army Reserves and was retired as a Lt. Colonel. He pursued a career as a Program Analyst in the Department of Defense Missile Defense Agency at Redstone Arsenal, AL. Altogether, he served 51 years with the US government. Larry has joined his parents and fur babies in heaven. While Larry is not in the flesh, he is still with Lynne (or as he affectionally called her "What's Her Name"), his wife of 49 1/2 years; his sister, Betty Buchanan and her husband, Jim; nephews, William and Lewis Buchanan; grand-niece, Alayna Buchanan; and "adopted" nephew and nieces, Ravi and Karina Locker (Huntsville) and Sophia and Maria Glazov (Japan). A funeral Mass will be announced and held at Holy Spirit Catholic Church, Huntsville. In lieu of flowers, memorial gifts may be sent to the Russel Hill Foundation (Clearview Cancer Institute) 3601 CCI Drive, Huntsville, AL 35805 or a charity of one's choice. "I have fought the good fight, I have finished the race, I have kept the faith" 2 Timothy 4:7 Life is not ended but changed.

The family has requested in lieu of flowers, memorial gifts may be sent to the Russel Hill Foundation (Clearview Cancer Institute), 3601 CCI Drive, Hu

Send flowers to the Hartman family.