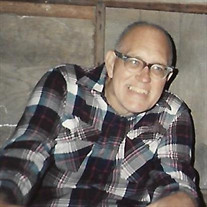 Louie Rodger Naylor age 75, of Union Grove, AL passed away Wed. April 4, 2018, at Marshall Medical Center North. Louie was born on August 22, 1942, in Etowah County, AL the son of Henry Loura Naylor and Dovie Hall Naylor. He graduated from Sardis High School in 1961. Louie served in the National Guard and enjoyed his career at Redstone Arsenal where he worked as a computer analyst. After retiring he went to work at Wal Mart in Arab and enjoyed meeting people there. He answered the call to preach in his 30’s and preached as opportunity was given him and he pastored The Church of the Living God in Arab for a time and also pastored Beech Springs in Parches Cove for a while. Bro. Louie had a program on WRAB on Sunday mornings for many years. He was a member of God’s Way Ministries in Arab. He is survived by his Wife, Betty Naylor of Arab; Son, Michael Naylor of Fyffe, AL; Daughters, Melissa (Nathan) Otwell of Arab and Mary Naylor (Tanya Harbin) of Baileyton; Grandchildren, Stephanie Otwell, Melanie Otwell, Liberty Scott, Lillyanna Hunkler, Leone Hunkler and Emma Harbin; Great Grandchildren; Elianna Bagwell and Corbin Smith. Funeral Service will be Friday April 6, 2018, at 2 PM at God’s Way Ministries with Gary Harvell and Ricky Hayes officiating. Burial will be in Corinth Cemetery. Mr. Naylor’s body will lie in state at the Church on Friday from 12-2 PM. Visitation will be Thurs. April 5, 2018, from 6-8 PM at Gober Funeral Chapel. Pallbearers: Jimmy Kelley, Jimmy Smith, Dustin Stewart, Eric Hayes, Adam Hayes, Dennis Smith. Honorary Pallbearers: Ira Burgette and Stephen Smith.

The family of Louie Naylor created this Life Tributes page to make it easy to share your memories.

Send flowers to the Naylor family.