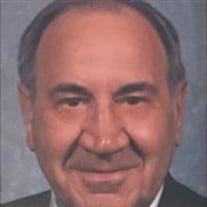 Rex Elmo Smalley, age 90, passed away peacefully in Auburn, AL surrounded by family on Saturday, September 23, 2017. He was born in Arab, Alabama on April 18, 1927, to the late John Anderson and Beulah Martin Smalley. Rex was married to Virginia Smalley for over 63 years prior to her passing in February 2015. Rex attended Arab High School before attending Saint Bernard and Jacksonville State University, where he played basketball. He often told the story of taking on NBA, all time great, Bob Pettit, when Saint Bernard played LSU and holding Pettit to 50 points…”in the second half”. After high school and prior to attending college, Rex enlisted in the Navy and served in the Pacific Theater during the final year of World War II. Rex was a longtime resident of Arab, Alabama where he was a civic leader and businessman. He was one of the founding board members of Security Bank and Trust, served on the Arab Fire Department and served as Arab City Police Commissioner. He owned and operated Rex Smalley Tire Service for many years on Main Street, where practical jokes were hatched and local politics and sports were hot topics. In the late 1960s, he was elected Sherriff of Marshall County and served 3 terms. He remained interested in civic events, local and state politics throughout his life. Rex, along with Virginia, was a lifelong member of the Arab First United Methodist Church. Rex’s passion was spending time with friends and family and was known for breaking bread with both as often as possible. He loved Arab, Marshall County and Auburn Football immensely. He was known for his gregarious nature, sense of humor and practical joking of which he could give as well as take. He had a special ability to connect with people from all walks of life. He always demonstrated character and a positive spirit to his family and friends throughout his 90 years. His final hours on earth were spent with his family and watching Auburn Football with his three sons. Rex left a lasting legacy of love and commitment to his family and his wife Virginia. Rex was preceded in death by his brothers: Rayburn (Bessie Lee) Smalley, Ray (Etrulia) Smalley, Bryant Smalley, Jerrel Smalley and sister: Mildred (Elb) Deerman; brothers-in-law: JD Reynolds Jr., and David Pendergrast and sister-in-law: June Pendergrast. He is survived by his sons: David (Debbie) Smalley of Auburn, Bruce (Jackie) Smalley of Arab and Jeff (Tracy) Smalley of Auburn. He is also survived by 9 grandchildren: Patrick (Lauren) Smalley, Sarah (Matt) Nunnelly, Leigh Catherine Smalley, Alexis Smalley, Lydia Smalley, Blake (Megan) Smalley, Alli (Brock) Bracewell, Sam Smalley and Emily (Blake) Cogdill; four great grandsons: Pearce Rex Smalley, Rylan Gage Cogdill, Stisher Thomas Smalley, David Elijah Smalley; three great granddaughters: Ava Jean Bracewell, Harper Virginia Smalley and Hadley Blake Cogdill, sister-in-law: Louise Smalley, sister-in-law: Martha Jean Reynolds and a host of nieces and nephews. Visitation will be from 10:00 AM to 12:00 PM on Saturday, September 30, 2017 at the Arab First United Methodist Church with the funeral service to begin at 12:00 PM. Brother Steve West will be officiating and Brother Mike Shirley will share the eulogy. The burial will be at the Brookwood Cemetery, Gober Funeral Chapel, directing. Pallbearers will be Patrick Smalley, Blake Smalley, Sam Smalley, Brock Bracewell, Matt Nunnelly and Wes Kitchens. In lieu of flowers contributions may be made to Alzheimer’s Association at www.alz.org or Arab First United Methodist Church 256-586-5792.

Rex Elmo Smalley, age 90, passed away peacefully in Auburn, AL surrounded by family on Saturday, September 23, 2017. He was born in Arab, Alabama on April 18, 1927, to the late John Anderson and Beulah Martin Smalley. Rex was married to Virginia... View Obituary & Service Information

The family of Rex Smalley created this Life Tributes page to make it easy to share your memories.

Send flowers to the Smalley family.