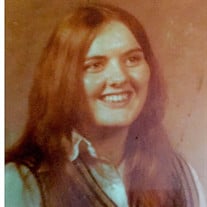 Vicki Lynn Martin, 60 of Arab died Friday, June 16, 2017 in Hospice of Marshall County, Shepherd&#8217;s Cove, Albertville. Ms. Martin was born March 24, 1957 in the old Arab Hospital. She was a Homemaker and enjoyed being with her family. She... View Obituary & Service Information

The family of Vicki Lynn Martin created this Life Tributes page to make it easy to share your memories.

Send flowers to the Martin family.