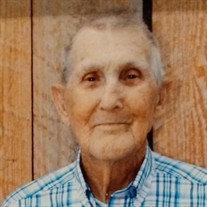 Willard Franklin Bryan, 96 of Baileyton passed away Friday, July 30, 2021, at his residence. Willard was born May 30, 1925, the son of Tollie Columbus Bryan and Evie Lena Pitts Bryan. He served his country with honor and courage in the US Army... View Obituary & Service Information

The family of Willard Franklin Bryan created this Life Tributes page to make it easy to share your memories.

Send flowers to the Bryan family.